How the projects* Helped Hotels.com Build Brand Awareness, and Won a Prize for Their Work

It’s critical to build brand awareness for any company, regardless of sector or size. After all, if people don’t know about your brand, they can’t purchase your products.

One way to do this is to find Instagram influencers who can publicize your brand on social media. With over 1 billion monthly users, Instagram is a great channel for getting your brand’s name out there.

That being said, influencer marketing campaigns can be tricky, especially for those new to the strategy. “How to” guides can get theoretical fast, and you might be left feeling a bit confused. Sometimes the best way to understand how to do something is to see an example, so let’s look at a case study to better illustrate the process.

Hotels.com is an American travel company that lets travelers book hotels both online and over the phone. The company was founded in 1991 as Hotels Reservation Network, and in 2001 became a member of the Expedia group. Under Expedia, it was rebranded as the Hotels.com we know today.

Hotels.com works with the projects*, a cultural and creative agency that works with digital strategies, including influencer marketing. With offices in Los Angeles, New York, London and Sydney, the projects* helps clients from around the world fulfill their social media needs.

For this campaign, Hotels.com asked the projects* to position the company as “a brand that provides the best choice of accommodation in the most exciting location” but without using any traditional travel influencers.

This meant the projects* had to get really creative with their influencer strategy. Despite this challenge, the projects* took home gold for Best Travel Campaign at the Influencer Marketing Awards (IMA) 2020. Let’s see how they did it.

The agency had some strict parameters to follow. With travel influencers excluded, they needed to find content creators who could take followers on a journey without the common travel influencer tropes.

They also had to build brand awareness for Hotels.com as the choice for finding top-notch accommodation in exciting and exotic places. To tell this story, pictures of pretty hotel rooms isn’t enough. To plant the ideas of excitement and reliability, the projects* had to tell a story. And they needed personalities who could carry that narrative and sell it to their followers.

The projects* chose two very different influencers to work on this campaign. Let’s break down each and see why they were a good fit for Hotels.com and their brand value proposition.

What Dolly lacks in size she makes up for with personality. This chihuahua from the UK is, according to her website, a style-icon, LGBT+ activist, and the only dog to be signed to a human modeling agency.

For this big personality, the projects* and Hotels.com sent her to a city with an equally big attitude: New York. Dolly visited landmarks like Times Square, Rockefeller Center, and the Statue of Liberty. She ate pizza and hailed a cab. And she even made pop culture stops at Carrie Bradshaw’s brownstone and the FRIENDS apartment. Dolly also got the luxury treatment at the Midtown Refinery Hotel - personalized service and picture-perfect views of the Empire State Building. 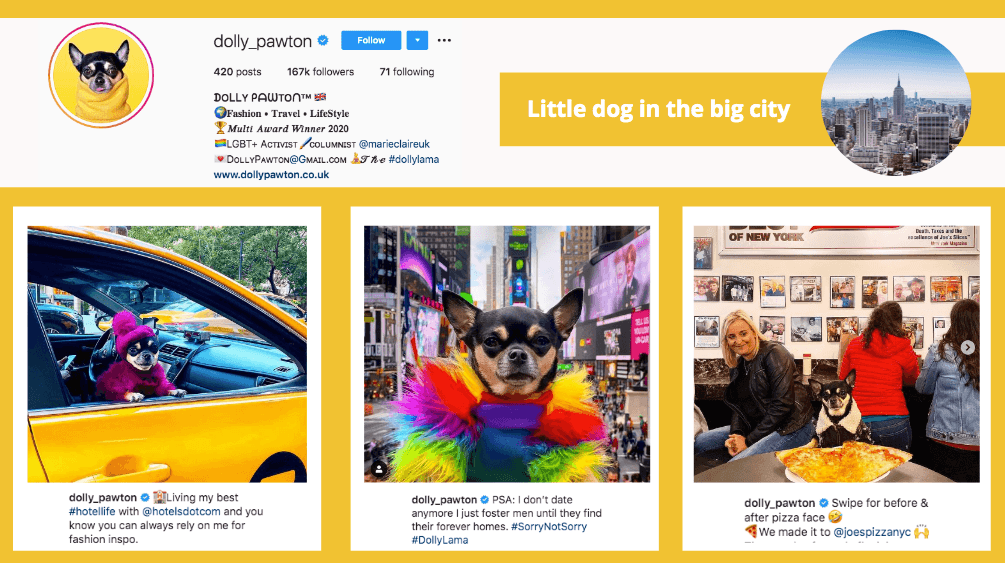 Wally Koval himself isn’t necessarily well-known by name, but his Instagram account definitely is. Accidentally Wes Anderson’s 1.3M followers tune in for the feed’s perfectly curated content inspired by the aesthetic of film director Wes Anderson. Symmetry, pastel color palettes and vintage vibes give the account a dreamy and whimsical feel.

For the Hotels.com campaign, the projects* sent Koval to Japan. There, he focused on details that matched the Anderson aesthetic and got into some of the more eccentric details of Japanese culture. Koval touched on train fanatics, bathhouses, sushi prices and more. And he didn’t just explain; Koval also used trivia-style questions to invite his followers to participate in his journey. 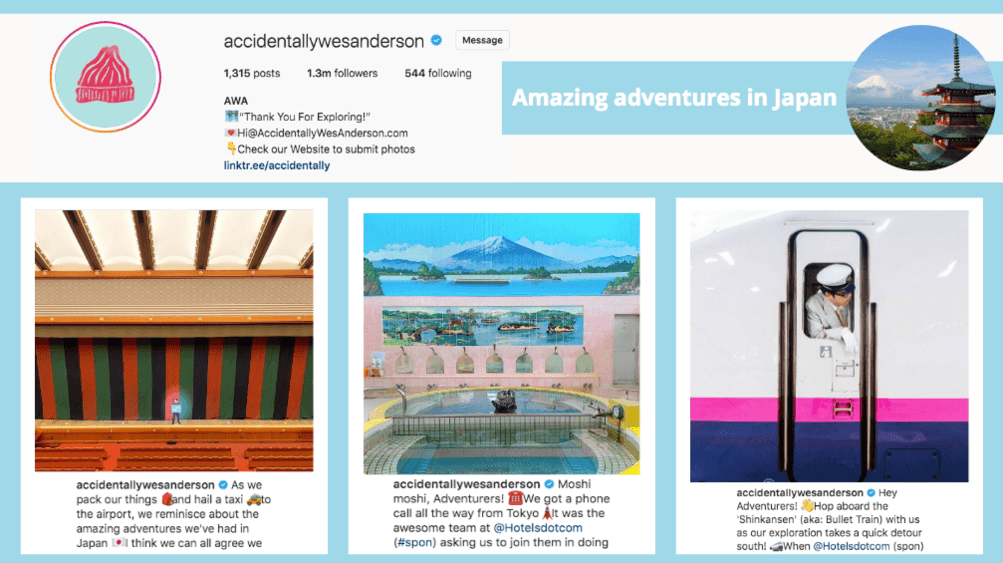 Download your full, free PDF copy of the Definitive Guide to Influencer Marketing! 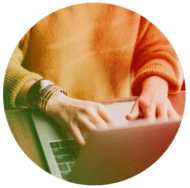 The results of the campaign, according to the IMA, were 90 posts and stories, 4.1M organic impressions, and a reach of 1.3M. Well, and of course the prize for Best Travel Campaign.

So, why these influencers and how did they do it? There are a few things to break down.

Thematically, the accounts also share a similar concept: they both put a fresh twist on everyday life. However, the way that they go about this is very different. This was an intentional choice by the projects* and Hotels.com, who according to the IMA, wanted to “split the audience into two tribes.” By avoiding traditional travel influencers and focusing on other niches, Hotels.com was able to build brand awareness in unique and memorable ways, each designed for its tribe.

Dolly Pawton represents the pets of Instagram tribe, who love to watch life through the eyes of a cute and feisty anthropomorphized character. It helps that the supposed target audience - millennials - is the generation that has the most pet owners, according to a 2019-2020 study about pet owners in the US.

Dolly is a celebrity in her own right, and as her followers watch her explore her dreams, they may be inspired to follow in her footsteps. After all, if a chihuahua can do it, so can you.

To start, by analyzing the two accounts, we can guess that Hotels.com wanted to target millennials as their key age demographic. First, Instagram’s leading age demographic is people between 25-34, and second, more than 50% of the followers of both influencers were in that age group. 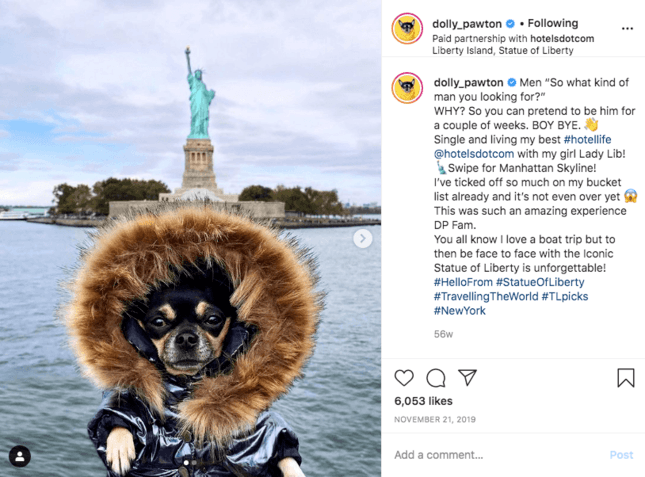 Accidentally Wes Anderson connects the brand to the arts & cinema tribe. Wes Anderson is known for making the ordinary feel somehow special, and his aesthetic works well on Instagram. He’s also a cinema director who came to prominence in the early 2000s, just as millennials were coming of age. 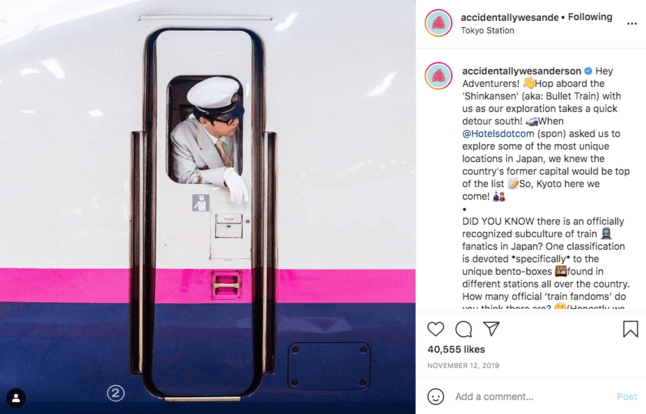 Build brand awareness with influencers who have healthy metrics

High engagement also helped make the campaign a success. Remember that engagement rate shows the level of interaction between an influencer and their followers. Influencers with good engagement can better portray your brand to their followers, as their followers trust them and are genuinely interested in their content.

Finally, it’s important to note that both accounts had very low percentages of suspicious followers. It’s not uncommon for influencers to buy fake followers. And while that increases the number at the top of their profile, it doesn’t help their engagement. It’s an important metric to look into before selecting influencers, and in this case, everything looks good.

Running a travel campaign without any travel influencers was definitely a challenge, but the projects* approached it in a creative way that paid off. The campaign helped build awareness of Hotel.com through the lenses of two adventures seeking out the special moments of everyday life in two vastly different but equally exciting locales.

Back to Case Studies