Based on both follower count and engagement rate, these are the top Instagram influencers as of February 2021.

In addition to appearing on Keeping Up With the Kardashians with her famous sisters, Kylie Jenner is the founder of Kylie Cosmetics and Kylie Skin. According to Forbes, she also became the world’s youngest billionaire in 2019 at the age of 21.

Demi got her start on kids’ TV, but later went on to have a successful music career. She’s also appeared as a judge on the X Factor and a guest star on Glee. Demi’s also known for speaking out about mental health issues like eating disorders and substance abuse.

Mahendra Singh Dhoni is a former cricket player and former captain of the Indian men’s national cricket team. He led India to win the Cricket World Cup in 2011. He’s also the owner of other Indian sports clubs, and even had a film and TV series made about his life.

Camila is known for her role as Veronica in the American teen drama series Riverdale. She speaks both English and Portuguese, and spent part of her childhood in Brazil. Camila is a graduate of the prestigious New York University Tisch School of the Arts.

Lalisa Manoban, better known as just Lisa, is a Thai-born singer who is now based in South Korea. She makes up one fourth of the girl group Black Pink, which is the most-subscribed music group on Youtube. And in late 2020 she became the newest face of MAC Cosmetics.

Selena’s come a long way since her Disney days. She’s found success as an actor, producer and musician. In September of last year she also launched Rare Beauty, her own makeup line which strives to create a welcoming space for people of all backgrounds.

Like her sister Kylie, Kendall is also part of the Kardashian clan. Kendall started modeling at age 14, and has walked the runways at New York, Paris and Milan fashion weeks for a slew of top fashion houses.

Zayn is an English singer who rose to fame for being a member of One Direction. He left the group in 2015 and started his solo career. Since then, he’s collaborated with the likes of Taylor Swift and Sia. His third album, Nobody is Listening, came out in January 2021.

Unlike the rest of this list, Lele Pons became famous solely because of social media. The Youtuber first got her start on Vine, and later went on to become an actor, musician and model, and most recently debuted her own biographical series, The Secret Life of Lele Pons, on Youtube.

Lili Reinhart appears as Betty in Riverdale, co-starred with Jennifer Lopez in Hustlers, and this past October released a book of poems, Swimming Lessons: Poems. The actress and writer is also an ambassador for American Express and Cover Girl.

When your brand wants to find Instagram influencers, it’s important you first establish their objectives, target audience and marketing campaign’s timeline and budget. Once you’ve done that, figure out what kind of influencer you want to find. Then, you can search in the following places:

3. Track your branded hashtags and hashtags related to your niche to find influencers who are using them

4. Use an influencer marketing platform to find Instagram influencers

5. Find Instagram influencers with the help of an agency

Instagram’s mention feature lets you tag other accounts when you upload content. When Instagram users tag your brand in posts, you’ll get notifications to your account. Sift through those, and see if any of the people mentioning you look like influencers who could be relevant to your campaign.

Branded hashtags are hashtags specific to brands. It’s not uncommon for brands to post branded hashtags on their profiles and invite followers to use them. Track these hashtags, because there may be worthwhile influencers trying to get your attention.

Also, develop a list of hashtags related to your niche. Track those, too. Maybe there are influencers interested in your niche but who don’t know about your brand. They may be the perfect match for your collaboration.

Software like this requires a subscription, but can save you a lot of time and effort when trying to find Instagram influencers. Moreover, you can make more confident decisions after vetting influencers’ metrics. If you’d like to give an influencer marketing platform a go, Heepsy has a variety of plans for businesses of all sizes.

Finally, you could hire an influencer marketing agency. They’ll do all the campaign work for you, but these services come at a hefty price. Before hiring an agency, make sure it’s the best decision for your brand.

Whatever the method you decide to use, make your initial proposal as attractive as possible. Tell them something about your brand, what part you want them to play in your campaign, and why you think they’re the right fit.

Around 70-80% of influencers will open your email. Around 50% will click a link. And about 30-40% will actually respond. Due to these rates, it’s best to contact more influencers than you think you’ll need.

Also, sometimes when working with Instagram influencers who have managers, it’s better to contact them via DM. This way, the message arrives directly to the influencer and not to the manager, who will try to drive up fees. 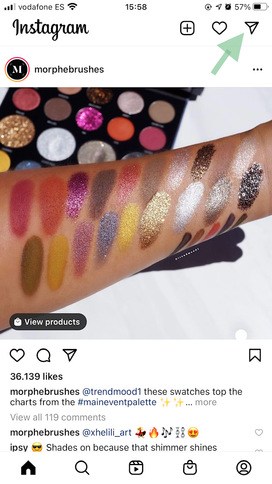 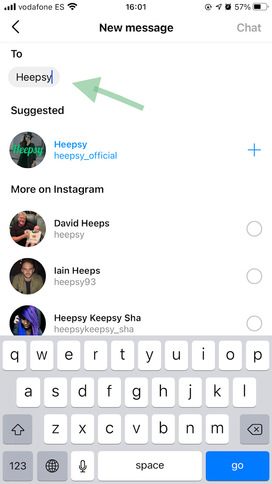 As a note, you can also use the DM function to send photos or start a video chat. You can also use DMs to send Instagram content to another user. Under the content you want to send, just look for the same paper plane icon.

As a brand, you should check your DMs regularly. You may find influencers trying to get your attention, or customers who want to get in touch with you.

Check out our other FAQs:

How to Find Influencers

How to Find Influencers For Your Brand